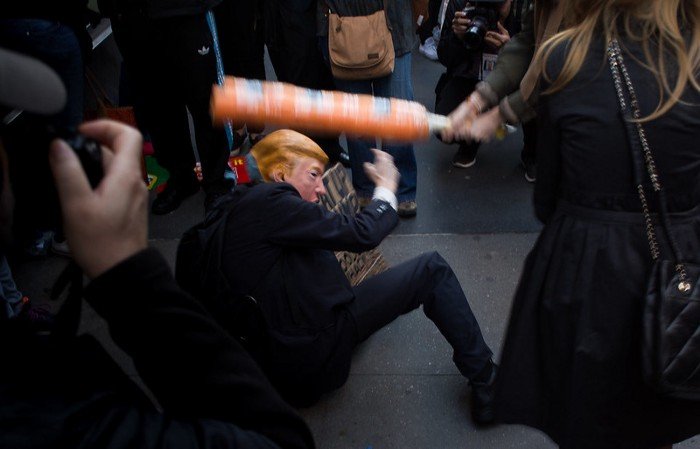 When what’s-his-name began his run for President in 2015, most people in the media seemed to think it was a joke. Many mainstream media celebrities and pundits laughed when they had to announce something about “The Donald.” But to supporters like Corey Lewandowski and David Bossie, who wrote the book, Let Trump Be Trump: The Inside Story of His Rise to the Presidency, there is Kool-Aid, and then there is the Jim Jones unique brand of Kool-Aid to which this belongs.

Let’s get real here. If you’ve lived anywhere on this planet for at least the last five years and unless you’re addicted to Fox News, you must have at least heard that Donald Trump is a colossal serial liar. Or that he’s an admitted p*ssy-grabbing serial rapist and misogynist, a xenophobic, white-supremacist endorsed by David Duke, a former leader of the Ku Klux Klan.

Moving on from his good points, I could go on for days listing his more vile characteristics, but if you have an open mind and Fox News hasn’t brainwashed you, I’m pretty sure that you may already know them.

Because to paraphrase Shakespeare, “I come to bury Trump, not to praise him.”

I wish. If ever the planet would have been better off without the birth of just one, single person, it’s Donald J. Trump.

Why Did They Say, “Let Trump Be Trump”?

Honestly, did the authors think that portraying him as he is would win votes? They must have thought so because he simply wasn’t doing as well when he was trying to be “Presidential.” He has the attention span of a gnat, the reading ability of a fourth-grader, and was an easy target for impressionists playing on his defects.

Those true-believers knew there was an entire segment of the population who identified themselves with Trump because he “tells it like it is.” People hated Hillary with a passion and couldn’t wait to “take our country back” from that ‘n?gger’ in the White House and everyone like him.

So, let’s talk about Trumpers, not him because they are almost as big a problem.

They are probably an even more significant problem because he is their leader, and tacitly permits them to echo his actions and utterances. Once he is out of power, there will still be “Trumpism,” and he will be only too happy to satisfy his incessant need for insatiable approval by providing them with “leadership.” He, and they, will be a constant thorn in the side of any attempt at rational governing.

We’ve Now Seen Trump Being Trump. Is That a Good Thing?

I suppose that for those who took him literally when he said, “What have you got to lose,” never really thought that much about it. For those of us who lived in the New York City metro area in the eighties, we couldn’t imagine that the clown show we knew as Donald Trump could be taken seriously by anyone with half a brain.

Now that they’ve seen the real shitshow, do they regret it? It doesn’t seem like it with 38% of the populace still drooling over his every word and deed. We call them his base and base they are. I simply do not understand how certain friends of mine can still support him. Doctors, dentists, educated people, along with those suffering from the Dunning-Kruger effect, admire him.

They can’t all be racists, can they? Are they all absolute suckers for his serial lying? They can’t all possibly be members of Sociopaths of America, right?

My wife and I were outside talking to a landscaper today. I’ve dealt with him before, and he’s a lovely man. He was telling us about how often he tests his labor pool and the resentment he deals with when having to tell someone that they can’t work for a couple of weeks because they tested positive. Bear in mind that we live in Florida, currently one of the world leaders in COVID-19 infections. We were wearing masks, and he wasn’t. At one point in the conversation, he expressed frustration in not knowing what to believe.

I would hope that anyone would expect decency, morality, and principle to be part of the government that leads them. I can almost see a political ad with a picture of Trump and the caption, “Would you buy a used car from this man?” Really, would you? You know him now; you’ve seen him in action. There is hardly ever a word of truth that comes out of his mouth.

A Serial Liar, My Friend, is Donald Trump in a Nutshell.

So why on Earth would anyone ever recommend that Trump should be Trump, instead of trying to find a more normal human?

How about this for an answer — they knew roughly 38% of this country feels the same way about all the things that Donald Trump espouses. With a 38% lock, they just needed to convince another 13% to buy the lie. Surely many Republicans would step up, as well as many Independents. How many felt that Donnie was a newcomer to politics, so he couldn’t possibly be as bad as the long-term politicians? Hillary had been in national public political life since 1992, with plenty of time to build up a list of enemies and pure hatred in the mind of the public. If you hated Hillary, there’s no better reason to vote for Trump. Sometimes I wonder how she even managed to get almost three million more votes than Donnie with those odds.

Here’s the thing about arguing with a liar. You can never win. For every argument that you bring up, they’ll bring up another lie. If you’re a Trumper, you love this, because he’s winning. He’s beating the establishment at their own game. He promises you all the things you want to hear, and he’s winning! Whether you just hated Hillary, or that “black bastard” in the White House, or only vote Republican, or just want the baby-killing abortion clinics to stop, or want the Pledge of Allegiance back in schools, you love this guy. How many politicians assign nicknames like Little Marco, Low-energy Jeb, Crooked Hillary? He’s a successful billionaire who says he funded his campaign, and you love it!

Maybe you’re tired of gays getting married and wanting their rights. Donnie’s going to take care of all of that. Remember, “what have you got to lose?”

What Will Trumpers Do If Their Boy Loses In November?

What idiot with a national platform will stand up for them and create an atmosphere where they can vent their frustrations and rage with impunity? Will they see their loss as a regular, cyclical part of democracy, or the result of a “deep state” plot, or voter fraud?

Let’s break down the losers by category. These certainly aren’t all Trumpers, but they’ll have to find a way to cope.

Such is our America today. Our basest instincts are allowed to run free because 38% of the population are bullies and loudmouths with no filter, and no way, or reason to discern right from wrong.

If Trump Loses, the Transition Period Will Be a Nightmare.

Let’s fast-forward to November. Will Donnie accept the election verdict if he loses, or claim voter fraud, as he’s setting us up for now? Will Vlad (Putin) stage some sort of crisis, causing Donnie to try to postpone the election? Where does this 38% base go to relive their recent glory days if he loses? You can rest assured that the hue and cry from Trumpers will not lack for “leadership.”

Having survived impeachment, and with nothing to lose, wholesale pardons will be issued, rats will be abandoning ship, cooperation with an incoming Biden administration will be non-existent. Barr’s DOJ will secretly be shredding documents. The Department of State will be doing likewise, and all will be deleting records on servers that no one even knew existed before.

As if that weren’t enough, if Mitch McConnell keeps his leadership role in the Senate and Biden wins, the Grim Reaper will continue to wreak his very own brand of havoc. But that’s a whole other episode.

To save our country, voters must thoroughly thrash Trump to show the Trumpers that though they be loud, they are still a small, small minority.