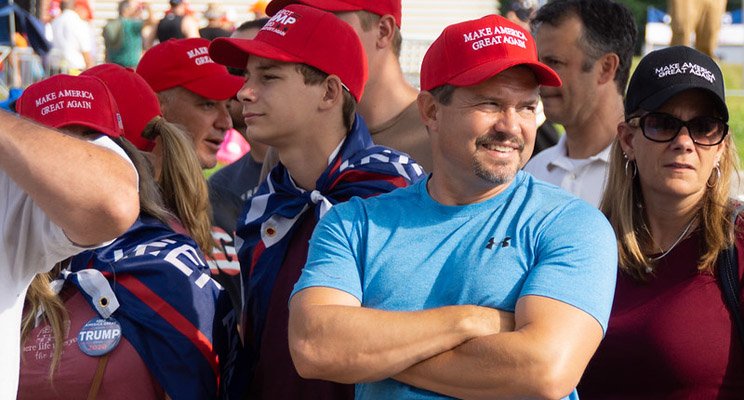 With all the oxygen sucked out of the conversation every day by their fearless leader, Donald J. Trump, we should remember that 63 plus million Americans voted to put him in that position. For that reason, he can rightfully be called the glorious founder of the cult of Trumpism, a political movement (cult) known mostly for its many ignorant, racist, far right-wing bullies.

More than a political movement, it really is a cult of fanatics who believe every single lie spewing from his COVID-19 ridden mouth, and nothing anyone says will convince them otherwise. These are the roughly 38% who will vote for Donald Trump no matter what.

Incidentally, I know a woman who has a life-sized cardboard cutout of his majesty in her front hallway. Not noticing my dropped-jaw upon seeing this, she cheerily asked if I liked him.

Politely informed that I did not, she asked why. I told her that if she had lived in the New York City Metro area in the seventies, eighties, and nineties, she would know why.

Even back then, Trump was a well-known, serial, sociopathic liar who says things just because he thinks they make him sound good. Anything. He can’t help himself. He lies even when there is nothing to be gained except scorn for being caught in a blatant lie.

Sixty-two percent of the country (those other than the 38% who form his cult) know that his words are verifiable lies. Verifiable! That is, captured on video or audio.

But (Her Emails) His Lies?

Trumpers don’t care about his lies. According to statista.com, Trump was considered five percent more honest than Hillary Clinton, and she was only thought to be 25% honest!

And isn’t that lack of caring one part of the definition of a cult?

“A misplaced or excessive admiration for a particular person or thing.”

Consider Jim Jones and the tragic murder of his followers in Jonestown in Guyana in 1978.

Or the disputed history of David Koresh and the “Branch Davidians” and the tragedy in Waco, Texas, in 1993. The term “disputed” is used because while “David Koresh taught that he was a messiah,” various other factors came into play challenging the idea that he led a cult.

Whatever the reasons, whatever the consequences, blind faith in obviously human wisdom versus sheer common sense, can hardly lead to good outcomes.

Why Would Anyone Ever Trust a Sociopathic Liar?

This is a wild guess, but suppose Trumpers wanted to verify what they heard from The Donald. Where do you think they would go for that? How about Fox News, Breitbart.com, InfoWars.com? Of course! Conspiracy theories abound and are reinforced at the White House and on Twitter.com.

I have even watched a member of Congress on the House floor state that we can only get the truth from the President of the United States!

Many Trump loyalists have told me when faced with facts from the Washington Post, the New York Times, PolitiFact.com, or Snopes.com that they are all Fake News and not to be trusted. Why? Because they are all the “Enemy of the People.” Such is the power of a cult leader.

And yet, we’ve brought this on ourselves. People are looking for something different in our elected officials. On the one hand, they want them to be like us. On the other, they want someone special. Gallup polls on Congressional job approval back to 1974 average a 63% Disapproval rating. So, what do we give them? A liar who has tapped into their deepest frustrations and continues to feed them exactly what they want to hear.

There is deep dissatisfaction with Congress in the country, and when someone is so different and “tells it like it is” and promises to “drain the swamp”; that noise gets attention. Were you appalled when you heard the name-calling and nicknames assigned by Trump to fellow candidates for the Presidency? Remember “Low energy Jeb” and “Little Marco”? Trumpers obviously weren’t. They loved him for it because the others were all politicians and he wasn’t, but he was kicking their butts.

If you’re watching TV this Election season, in a pandemic with rising infections and deaths, tell me you don’t see thousands of cult worshippers literally risking a horrible death to get close, to hear the same words they’ve heard before, but this time right from the horse’s (ass) mouth.

Don’t wait. Don’t hold back. Give money to anti-Trump opposition candidates. Man the phones. Politics is the only means we have to save our republic, but this isn’t just political. It’s existential. There is a huge cult out there and they want us gone because we are in their way.